‘Sugars’ is the name for all types of monosaccharides and disaccharides found in nature and added to foods. This includes sugar (sucrose), glucose, and fructose in fruits and vegetables, lactose in dairy products, and foods such as honey, maple syrup, agave, glucose-fructose (also called high-fructose corn syrup), and concentrated fruit juice.

Production of Sugars Through Photosynthesis 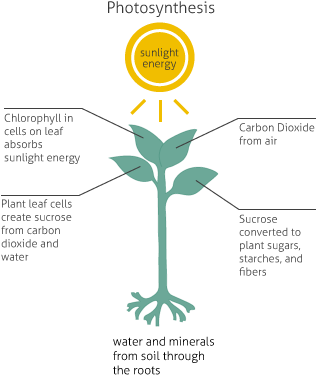 All green plants produce sugars through photosynthesis, a natural process that turns sunlight into energy. These include glucose and fructose, which are converted by the plant into sucrose. Sucrose, glucose, and fructose are found naturally in all plants, and are the basis for all food energy.

The sugars that plants produce are stored in the root, leaf, seed, or fruit of the plant. Sugar cane and sugar beets contain higher proportions of sucrose compared to other plants and are therefore harvested to produce sugar for use at home and in food products. A stalk of the sugar cane plant contains about 14% sugar and sugar beets contain about 19%.

Sugar cane is grown and harvested in tropical regions while sugar beets require cooler temperatures, such as those in Alberta, Canada. Despite originating from different plants, the resulting granulated sugar extracted from either cane or beets is the exact same: pure sucrose.

Sugars in Fruits and Vegetables

It is a common misconception that fruits only contain fructose and that sucrose is mainly added to foods during manufacturing. In fact, almost all fruits and vegetables naturally contain sucrose, as well as glucose and fructose, in varying amounts. For example, bananas, sweet peas and peaches contain primarily sucrose, whereas glucose and fructose are the main sugars in pears and tomatoes. While sucrose is found in almost all plants, sugar cane and sugar beets store sucrose in the greatest quantities and thus are harvested as the commercial sources of sugar. The following chart summarizes the sugars content of various fruits and vegetables.

Sugars found in fruits and vegetables are often viewed as healthier than sugars added to foods. However, the various sugars that are added to foods have the same chemical make-up as the sugars occurring in nature. They provide the same number of Calories (4 Calories/gram) when consumed, and are used by the body in the same way. As an example, the sucrose found naturally in a banana is the same sucrose added to flavoured yogurt. The banana is packed with many important micronutrients including potassium, magnesium and vitamin C, while the flavoured yogurt also offers calcium, magnesium and phosphorus. Importantly, the food matrix and other macronutrient components (e.g. fibre) can also influence how sugars are absorbed and metabolized in the body.

Other sugars ingredients include molasses, honey, maple syrup, and corn sweeteners (e.g. high fructose corn syrup), which are composed of varying levels of glucose, fructose, and sucrose (see figure below). All have similar nutritional values, provide a similar amount of energy (approximately 4 Calories per gram), and contain insignificant amounts of vitamins and minerals. For example, the recommended dietary intake level of iron for premenopausal women is 18 mg, which is equivalent to the iron content in 3 litres of honey (13,200 Calories).

Sugars do not include high-intensity sweeteners such as aspartame and sucralose, sugar alcohols such as xylitol, maltitol, erythritol, modified starch, or polydextrose (a type of soluble fibre).

Other sugars-based ingredients that you may see on an ingredient list of a packaged food include: