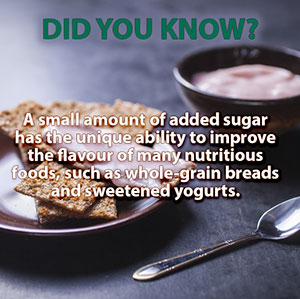 *This content has been reviewed by Dr. David Kitts (Faculty of Land and Food Systems, University of British Columbia)

Use of Dietary Carbohydrates as Energy

Dietary carbohydrates include starches, sugars and fibre that are mostly found in grain products, vegetables and fruit, milk products, and meat alternatives such as nuts, seeds, and legumes (1, 2).  Starches and sugars are the major dietary sources of glucose, which is the primary energy source in the body: 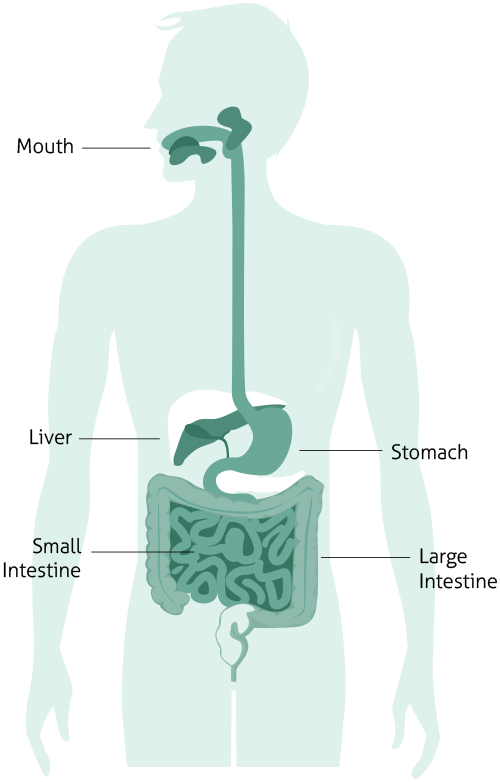 Before the body can use the food that is eaten, it must be “digested” (i.e. broken down) into its basic nutrient components.

The digestive system works like a giant food processor. During digestion, starches and sugars are broken down both mechanically (e.g. through chewing) and chemically (e.g. by enzymes) into the single units glucose, fructose, and/or galactose, which are absorbed into the blood stream and transported for use as energy throughout the body.

Digestion of starches into glucose molecules starts in the mouth, but primarily takes place in the small intestine by the action of specific enzymes secreted from the pancreas (e.g. α-amylase and α-glucosidase). Similarly, the disaccharides sucrose, lactose, and maltose are also broken down into single units by specific enzymes (See table below) (3, 4).

There are two major pathways for the metabolism of fructose (5, 6): the more prominent pathway is in the liver and the other occurs in skeletal muscle. The breakdown of fructose in skeletal muscle is similar to glucose. In the liver and depending on exercise condition, gender, health status and the availability of other energy sources (e.g. glucose), the majority of fructose is used for energy production, or can be enzymatically converted to glucose and then potentially glycogen, or is converted to lactic acid (See figure below).

The notion that fructose is an unregulated energy substrate and directly fuels fat synthesis in the liver is not supported by the scientific literature; within the normal consumption range very minimal amounts (<1%) of fructose are converted to fat (5, 6). It is important to note that the metabolism of fructose involves many regulated reactions and its fate may vary depending on nutrients consumed simultaneously with fructose (e.g. glucose) as well as the energy status of the body. 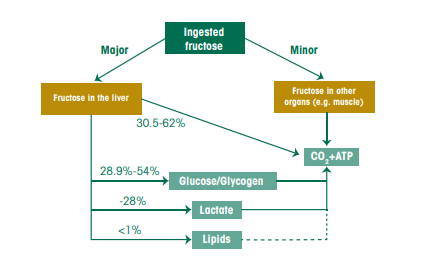 Factors that Affect Absorption of Carbohydrates

A number of factors affect carbohydrate digestion and absorption, such as the food matrix and other foods eaten at the same time (7).

Glycemic Index (GI) is a scale that uses a numbering system to rank carbohydrate rich foods as “high GI”, “medium GI”, and “low GI” based on the rate that glucose-containing carbohydrates are digested and absorbed, and the rate they increase blood glucose levels (8, 9). Foods with a high GI are more quickly digested, and cause a larger increase in blood glucose level compared to foods with a low GI. Foods with a low GI are digested more slowly and do not raise blood glucose as high, or as quickly, as high GI foods. Examples of factors that affect carbohydrate absorption are described in the table below: