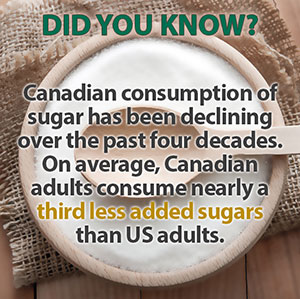 Today, Statistics Canada released the report,   Change in total sugars consumption among Canadian children and adults, based on nutrition information collected as part of the 2015 Canadian Community Health Survey (CCHS). The report describes Canadian intakes of total sugars (from naturally occurring and added sources), and compares it to sugars data collected as part of CCHS 2004. Overall, the study found that average daily total sugars consumption from food and beverages decreased from 2004 to 2015. However, after excluding misreporters, data from the “plausible reporters” did not show any change in total sugars consumption among children or adults. The report acknowledges that the data are based on one 24-hour dietary recall and there are inherent limitations associated with categorizing data by misreporting status.

In 2015, the average daily total sugars consumption from all foods and beverages was 101 grams for children aged 2 to 8, 115 grams for children aged 9 to 18, and 85 grams for adults, which demonstrates a reduction of 3, 13 and 8 grams, respectively compared to CCHS 2004. However, when misreporting status is taken into account, there is no statistical difference in total sugars intake in any age group between 2004 and 2015 data. Notably, this approach excluded about 40% of respondents who were classified as over- or under-reporters due to deviation of reported energy intake from their predicted total energy expenditure based on age, sex, a fixed level of physical activity (low or sedentary) and BMI category.

The report provides the top ten sources of total sugars from foods and beverages … “fruit was the greatest source of total sugars; all other top sources were similar, but varied in rank. In general, total sugars from the top food sources increased from 2004 to 2015, with the exception of the decline in sugars coming from the ‘sugars, syrups and confectionery’ category.”

The Canadian Sugar Institute (CSI) welcomes the updated dietary survey data on Canadian sugars consumption. The CSI intends to conduct further analysis to gain a better understanding of the distribution of intakes of total, added and free sugars and the trends in food and beverage sources.