How much sugars do Canadians consume? 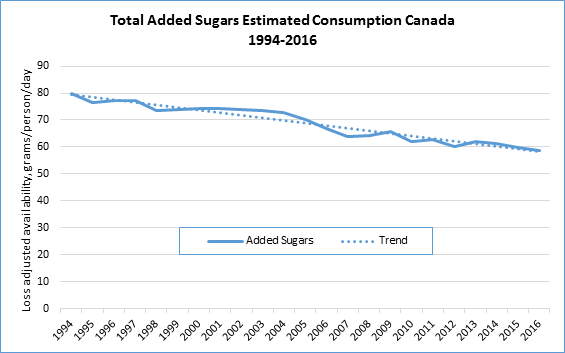 The best estimate of actual food consumption is the Canadian Community Health Survey (CCHS) data. The most recent dietary intake information currently available comes from CCHS 2004, which reported the average intake of total sugars to be 110 grams/day (21% of energy). From this information, the average consumption of added sugars was estimated to be 51 grams/day (11% of energy).

Health professionals and interested organizations eagerly await the release of the next iteration of CCHS dietary survey data collected in 2015, for more current information on sugars, as well as the ability to assess trends and changes in eating habits, food consumption, nutrition and health since 2004.

We can also consult trends in dietary intakes from other countries that share similarities with Canada, such as Australia. For example, this recent paper showed a similar declining trend in added sugars using availability data:

Background: Reduced intakes of added sugars and sugar-sweetened beverages (SSBs) have been the main focus of efforts to stall obesity. Although obesity has risen steeply in Australia, some evidence suggests that added-sugars and SSB intakes have declined over the same time frame.

Objective: We investigated recent trends in the availability of sugars and sweeteners and changes in intakes of total sugars, added sugars, and SSBs in Australia by using multiple, independent data sources.

Design: The study was designed to compare relevant data published by the Food and Agriculture Organization of the United Nations [FAO Statistics Division Database (FAOSTAT)], the Australian government, academia, and the food industry.

Conclusions: In Australia, 4 independent data sets confirmed shorter- and longer-term declines in the availability and intake of added sugars, including those contributed by SSBs. The findings challenge the widespread belief that energy from added sugars or sugars in solution are uniquely linked to the prevalence of obesity.