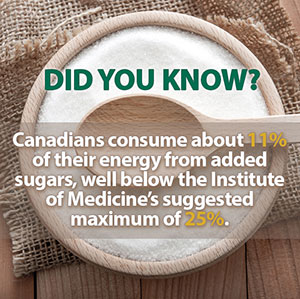 Canadian producers of refined sugar receive no government subsidies or market price support and Canada has one of the lowest sugar tariffs in the world. In response to this open market policy, Canadian refiners have had to rationalize and become globally competitive. Canada’s world price-based sugar market has fostered a thriving food processing industry. Maintaining a healthy and competitive sugar industry in Canada will continue to support value-added processing of sugar-containing food products. Over 85% of Canada’s refined sugar is sold to the food industry and about half of that sugar is exported in food products sold to the U.S. and other foreign markets.

While the Canadian sugar industry operates under world market conditions, most other countries continue to be characterized by high levels of government support including domestic subsidies and import restrictions. Sugar policies, most notably in the large economies of the United States, European Union and Japan, keep domestic prices above world prices. These high price policies in combination with restrictive tariffs and quotas stimulate domestic production while insulating their producers from import competition. Special quotas and lower tariffs are principally given to developing countries and almost exclusively to raw sugar (the input to sugar refining) rather than to the higher value-added, refined sugar produced in countries like Canada.

Canada’s import tariffs on sugar are among the lowest in the world. All imports of raw sugar enter duty-free and a small global tariff of $CAD 30.86 per tonne on refined sugar (about 5 – 8 % depending on world prices) modestly insulates the industry from world market distortions. Under the North American Free Trade Agreement (NAFTA) this duty does not apply to imports from the U.S. which enter Canada duty-free. Canada’s low tariff stands in sharp contrast to the much higher duties that Canadian refiners face in the United States and other major markets as shown in the chart below.

Canadian dollar equivalent as of July 2013.

The protected nature of the U.S., EU, Japan and most other potential sugar markets excludes Canadian refiners from predictable export opportunities in those markets. As a result, Canadian sugar producers are highly dependent on the Canadian market. Any losses from foreign competition in the Canadian market cannot be offset by competing in the foreign markets because of their import barriers. It is for this reason that the Canadian sugar industry is a strong supporter of multilateral (WTO) trade reform to secure predictable and meaningful access to export markets.

Prices in the Canadian Market

There is no publicly available information on sugar selling prices in the Canadian market because prices are set commercially, not through government policies. However, Canadian prices are based on world sugar prices which are significantly lower than the supported prices in the United States and Europe. Canada’s low import tariff also means that world refined sugar competition keeps prices low compared to the U.S. and other countries where tariffs are much higher. Historical tracking of import prices shows that Canadian sugar prices average approximately 35% below prices of sugar in the U.S. market.